I wanna be dehydrated, I wanna be a frozen pea, I wanna be artificial, because that's the way a girl should be in a consumer society !!!

Poly Styrene – an optimist to the last

Even while battling cancer in a hospice, the former X-Ray Spex singer was talking about writing new songs and fighting cynicism. Here was a pop star who truly made a difference 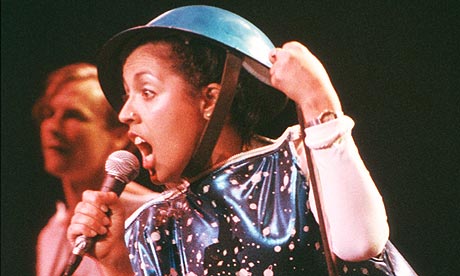 The internet is already melting with the warmth and love extended towards Poly Styrene, who died yesterday after a brave battle with breast cancer. As the singer with X-Ray Spex, her songs such as Germ Free Adolescents and The Day the World Turned Day-Glo were among the most memorable of the punk era.

Born Marianne Joan Elliott-Said, she was also a feminist and "misfit superstar" who paved the way for everyone from Kim Gordon to Karen O. Beth Ditto credits her with "shaping my identity" and her fans include Boy George and David Baddiel. But for generations of followers, the unassuming singer was more than an icon: she was someone who felt like one of us, and who will be mourned like an absent friend.

When I was 13, she had a huge impact on me because as a small, ginger-haired kid struggling with identity she was the first pop star I could identify with. Mixed race, young and wearing bonkers outfits and dental braces, her simple but powerful message was that it was OK to be different because everyone is special.

During the punk explosion, I owned just two punk albums: the Sex Pistols' Never Mind the Bollocks and X-Ray Spex's Germ Free Adolescents – and I played the latter most. Poly taught me about subjects that school didn't: identity crises, genetic engineering, and consumer society. Even today, those lyrics – and her wonderfully untamed phrasing – are burned into my brain: "I live off you, and you live off me, and the whole world lives off of everybody ... see we're gonna be exploited, by somebody, by somebody."

Back then, I could never have imagined that I'd end up interviewing her in a hospice as she battled breast cancer. Bed-bound after a fall broke her back in two places, she accepted the illness with incredible grace and I was struck not just by her bravery but also her humour. We spent much of the interview chuckling, beginning with her telling me she had once been taught by future Queen guitarist Brian May. "We used to heckle him. 'Sir, are you married? If you are married, why doesn't your wife iron your shirts?'"

She explained that her distinctive worldview had been formed by a mix of seeing the Sex Pistols and living off the land for a summer before returning to London and finding "everything seemed to be made of plastic".

X-Ray Spex were about "not trying to be like anybody else, but being yourself. High energy, youthful music, creativity. Better than expressing yourself through crime. Being in a band, saying what you want. It was better than being in a girl gang."

She explained how, as punk turned from liberating force to straitjacket, she'd quit the band – after being pelted with tomatoes during a gig in Paris. "We'd tried to change our sound," she explained. "They didn't like that, the anarchists in their black leather jackets. They thought it was the French revolution all over again."

But she admitted to not realising the significance of what she had started: "I didn't really think about it. I just went steaming ahead, like a bull in a China shop. I'm quite discerning about what I get behind, but when I really get behind something, I give it everything."

To the last, her optimism and energy never waned – and she was even talking of ideas for new songs coming to her in the hospice. Her new album, Generation Indigo, – uplifting, playfully opionated pop and her best music since the 70s – was "something really positive" she could leave behind, should the worst happen. Not that she feared it.

"I try not to be negative or cynical," she explained. "Even though we're in a crazy situation, economically, and with wars, when things go far right, they will have to swing left. We have to become more caring and sharing. Generation Indigo are the people who will protest peacefully, and it's happening already."

And then she smiled: the smile of a woman fighting a terrible personal situation, but thinking only of the world she had yet to leave behind. The smile of someone with no regrets, who had a lot of fun, and made a difference.