Page:
andreabicsottiSage
Ann Coulter is such a bitch, really she is. She much have lesbionic tendencies, and I wouldn't be surprised if she was. She must be the ultimate political and conservatively political drag queen EVER! She's such a publicity whore! Just like all celebrities, and appartently conservatives with too much rage for one body and gender alone! Bill O' reilly is another jerk-off (sorry for the language here!) that I wish, like Miss Coulter, would shut the hell up and get down off her soap box and leave us liberals alone. The only other word (besides the word bitch) begins with "c" and rhymes with "runt'---and I with spares you this one.
7/19/0612:36 PM
❤️ 0

daddySage
Oh go ahead and say it.
It will just get edited out by a certain Empress.

Anna NicoleSage
Thanks Chi Chi... really..... i was so put off my wheaties when i saw that image... daddy u cunt whore what were u thinking.... too many nights out with messy bonnie i say. (Or at HQ!)
7/19/062:50 PM
❤️ 0
andreabicsottiSage
I saw a picture of Ann Coulter in front of a cab in NYC. In The POST of all places. And I thought If I were driving that cab I would run her over!
7/22/068:14 PM
❤️ 0
andreabicsottiSage
Hey did anyone see Tucker Carlson on Dancing with the Stars last night? He was really stiff (his dance moves were that is). He looked at times to in the middle of a bowel movement!
9/13/066:18 PM
❤️ 0

Chi ChiAbsolute Empress
Back to the REAL topic here - AC

Congrats on the new contract, Anderson and thanks for being you..

quote:
Anderson Cooper has inked a new multiyear pact with CNN, according to sources inside the all news network. Under the terms of the new deal, the host of the CNN primetime show Anderson Cooper 360 can continue as an occasional contributor to 60 Minutes.

Although the network would not comment directly on the matter, CNN President Jon Klein said, "Anderson Cooper is an exceptional journalist, and his dedication in going after important stories wherever they occur makes him a natural fit for CNN. We look forward to more of his groundbreaking work in the years to come."

Cooper's previous contract with CNN was worth around $2 million a year, according to sources, and his new pay is more than double that amount. CNN has also made Cooper the center of an unprecedented multimillion-dollar promotional campaign.

Zazoo and SatoriSage
A fun vid of Anderson and Ryan Seacrest obviously flirting.

Disappointed to hear that Anderson hears comments about his "small tie" all the time.

JakersMotherlover
A cosmologist that I know is friends with Rob Marciano (CNN Lead Weather Dude) and apparently...
Here's a pretty picture:
Rob Marciano and Anderson Cooper. Put it there in your head. 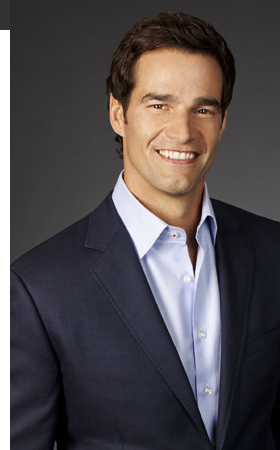 Darla DiamondSage
Tonsil hockey? Is that like ice hockey? Just back from getting knocked out in the semi-finals, but hey, this is our first year together and we are withouta doubt the most improved team in the league. Nothing like it. Ice hockey.
3/21/0711:06 PM
❤️ 0

daddySage
I was at the gym yesterday and next to me changing was this guy who looked very familiar. I said hello and was thinking to myself, who is this guy? How did I know him. Clubs? Gym? Bed Bath & Beyond? How did I know this guy.
He tied his shoes, said good-by and then it hit me.
I didn't know him, it was ANDERSON COOPER!
10/11/071:25 PM
❤️ 0

sevenSage
Yeah, he was late for a lunch meeting with me and Messy Bonnie Raitt. He mentioned the gym in his excuse for being late and me and Messy said, "Oh, that's where Daddy pumps, do you ever see a sharp lookin DJ with Flash animated abs?" To which he said, "In fact I had to get out of the locker room fast today cause somebody matching that description started to try to goose me!"
10/11/072:00 PM
❤️ 0

Miss UnderstoodSage
Wow, you'd think people like that would have private gyms at home. Like, how weird to know people are staring at celebrity ass in the locker room. You should stalk it for a whole day with a spy cam in your gym bag!
10/12/071:19 AM
❤️ 0

quote:
Originally posted by daddy:
I was at the gym yesterday and next to me changing was this guy who looked very familiar . . .it was ANDERSON COOPER!

daddySage
No, I don't go there any more.
It's not exclusive enough.

And by the way Madge,
I saw YOUR interview on Entertainment Tonight (or whatever it's called) the other night. You were lookin' pretty good too!
Where do you work out?
Hmmmmm?
10/16/0712:25 PM
❤️ 0

Miss UnderstoodSage
See a "trashy" video starring Anderson Cooper and a few guys with fists up their asses:
Click Here
10/18/071:42 AM
❤️ 0

jonomarRaconteur
Saw him standing and waiting on top of the staircase on the downtown 1/9 59th street station last Thurs...lookin cool despite the terrible humidity.
10/21/077:01 PM
❤️ 0