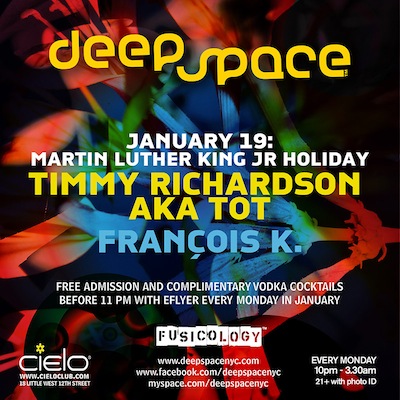 Timmy Richardson aka TOT, Bronx native likes to say he started his deejaying around the age of three.  He became obsessed with records and grew up listening to all the major NYC stations at the time. His all-time favorite was Frankie Crocker everyday on WBLS. This all led to his becoming a dj as well as an avid record collector.

He became a partner with Greg Daye of Wild Pitch, the moving underground parties of the late 80s . Timmy has  played alongside some of the greats in the scene including Timmy Regisford, Francois K, David Morales, Tony Humphries, and Louie Vega.

In 2006 he started a record label called TOT PRESENTS. TOT is an acronym for "The Other Timmy". People very often confuse him with the great dj Timmy Regisford. The label has a few releases out now produced by Timmy himself, as well as others. Timmy also specializes in mash-ups and is dubbed the Mashup King.

In 2012, Timmy started his own online underground dance station DHP RADIO. Timmy is also co-owner of the popular dance forum Deep House Page. Here is where you can hear tons of mixes from DJs from all over the world and classic radio mixes, as well as engage in dialogue about music and the scene. He also does a weekly 1 hour show for Motion FM. 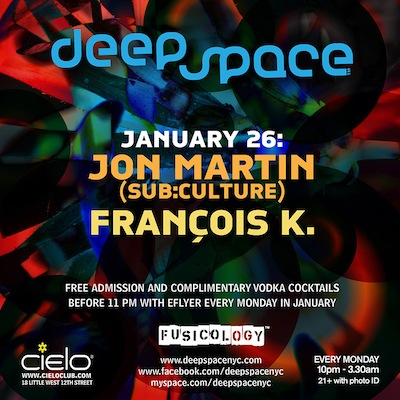 The child of two sociologists with deep roots in the Civil Rights movement and New York’s bohemian counterculture, Jon Martin grew up at the intersection of art, culture and grassroots political activism. In his mid-teens, he parlayed his passion for music into a street promotion gig, distributing flyers for clubs like Red Zone, Palladium and Tunnel while amassing a vast record collection and making slip-cue mixtapes for his high school friends.

A few years later, working in a coat check job at Twilo, he established lifelong friendships with notable nightlife figures including Godfather of House Frankie Knuckles, who introduced him to a cadre of legendary nightlife figures including Nicky Siano, Tedd Patterson and Eric Kupper, and taught him the basics of mixing, controlling a system and working a dancefloor. Knuckles was also a tremendous musical influence, schooling Jon inside the DJ booth of his Sound Factory Bar residency, as well as in the recording studio.

Martin quickly established several small weekly DJ residencies at downtown bars and lounges at which he would cut his teeth playing a broad spectrum of genres and styles. Through these gigs, and working as part of the production team behind local cable show GrooveTV and at now-defunct dance label Rampage Music, Jon began producing larger events at Times Square’s flagship arcade Barcode as well as clubs throughout Manhattan, including Ohm, Cheetah, Club New York, Centro-Fly and 667 Bar Gallery Lounge.

Leaving Rampage for a coveted Digital Content Director position at King Street Sounds, he continued to produce events, both on his own and in conjunction with the label, and contributed to the success of artists and projects including Ananda Project, Dennis Ferrer, Steal Vybe and Underground Artists United for Life.

Jon also provided web development and strategic marketing services for many high-profile DJs, including Knuckles, Kerri Chandler, Eric Kupper, Soundman Shorty and Todd Terry, while consulting with an even wider assortment of well-known labels and artists, from UK heavy hitter Defected and jazz-centric ObliqSound to underground pioneer David Mancuso, with whom Jon had developed a deep friendship after finding his way to one of Mancuso’s legendary Loft parties in the early 2000’s.

Jon created the sub:culture brand to provide an opportunity to funnel all of these disparate energies into one direction. Producing weekly events in New York and annually in Miami for the Winter Music Conference and playing several small European tours, as well as a weekly mixshow “Life Will Make You Dance” on CyberJamz internet radio, Jon has made numerous appearances on terrestrial, internet and satellite radio both in the United States and internationally.

Today, Jon continues on his mission to deliver “the medicine in the music” with his private House of Love parties and other sub:culture events, his involvement with husband Craig Roseberry’s KID Recordings label, and as a staff contributor to both David Mancuso’s Loft Parties and Starvue Loft in Bushwick. 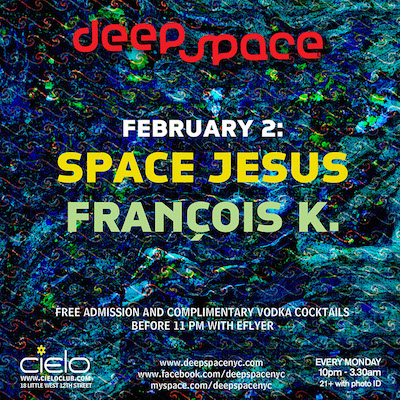 Space Jesus is the mind-spawn of Brooklyn NY based electronic music producer Jasha Tull. Fueled by bass and inspired by the intangible, Space Jesus is consistently driven by the urge to create future-based music. Born and raised in New Jersey, Jasha's firm roots in Hip-Hop are apparent in most of his productions. With a focus on bass-line synthesis, hard hitting beats, and psychedelia, Jasha explores a range of genres and tempos with a consistently urban feel.

Beginning in 2010 Jasha created an ever-evolving experience as Space Jesus. Less than a year later, he released his debut self titled 'Space Jesus EP', quickly developing a loyal fan-base throughout the Northeast. It wasn't until the 2012 release of 'PLANiTS' on San Francisco based MalLabel Music that his popularity spread to the West Coast. Soon after, Jasha began working with Rob Uslan, also known as Supersillyus, on a new psychedelic project named Schlang. Do Androids Dance called their debut EP 'Little Information Deposits' one of the best intelligent psychedelic bass records of 2013".


"You can't call yourself a real New York dance pro until you've rolled through Deep Space—Francois K's beloved Monday night residency at Cielo. The long-running party celebrates everything related to dubplate culture, and puts DJs like Digital Mystikz and Scuba in charge of spacey beats and bone-rattling low-end. You can bet they make full use of the state-of-the-art Funktion-One soundsystem. New York's Meatpacking District often feels like bottle-service Disneyland, but on its best nights, Cielo holds it down for the heads."     - www.thump.vice.com


Deep Space is an adventure into future dub, spacey vibes,
and abstract grooves featuring resident dj FranÇois K.
live on the mixingboard every Monday at Cielo.